The spring sun was shining and the smell of warm transmission oil lingered in the air as the buzz and anticipation of another Time Attack season was upon us. Public ticket sales were up, tensions were high and expectations were at a maximum and it was down to our series of drivers to deliver the goods, and boy did they deliver. 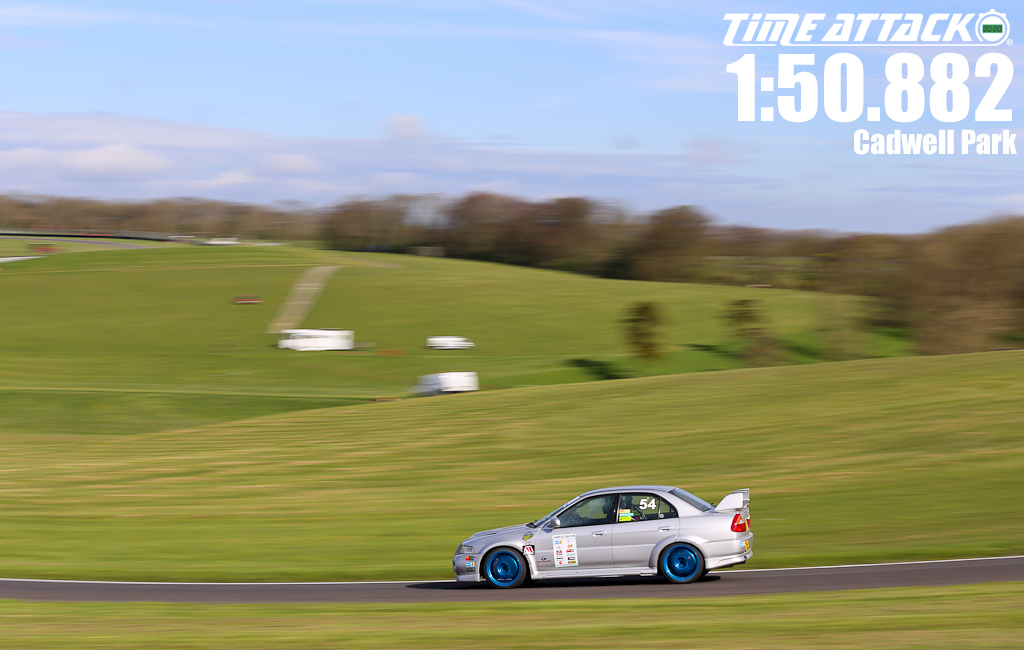 The opening session of the day started the day with beautiful track conditions and some impressive times were being pulled in all round. Lee Jordan (pictured above) put in a good practice time in the Clubman Fl class with a fastest lap time of 1:50.882.

Mark Flook in his Nissan GTR lead the leader board for the opening Warm-up, pulling in a fastest time of 1:47.559 with just three laps completed. He went on to improve on that time in the Practice session with a 1:43.175  and then 1:43.631 in the Qualifying and Practice sessions respectively.

Stewart Summers in his supercharged PlanetSaxx Saxo pulled in an impressive 1:48.577 early on only to go on and quash his all time PB in the Qualifying round, reaching a time of 1:41.590 to put him in good stead for the finals. 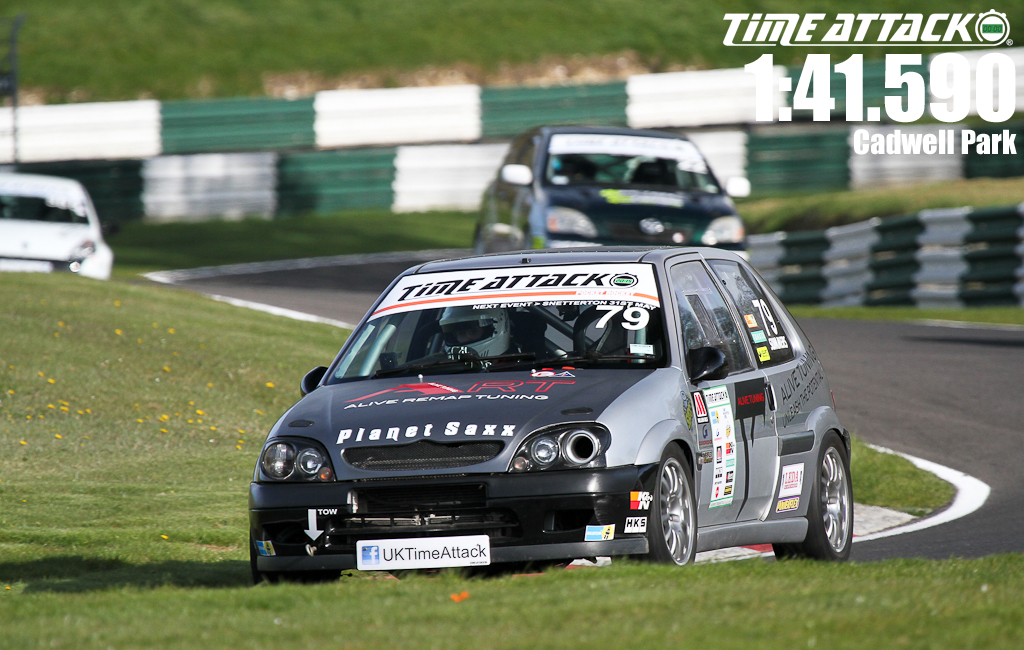 In the Club sessions Logan Black in the Mitsubishi Evo was leading the lap times for the Practice round, after missing the warm-up session, with a fastest lap time of 1:38.329. He went on to improve on that in the Qualifiers with a 1:37.542. 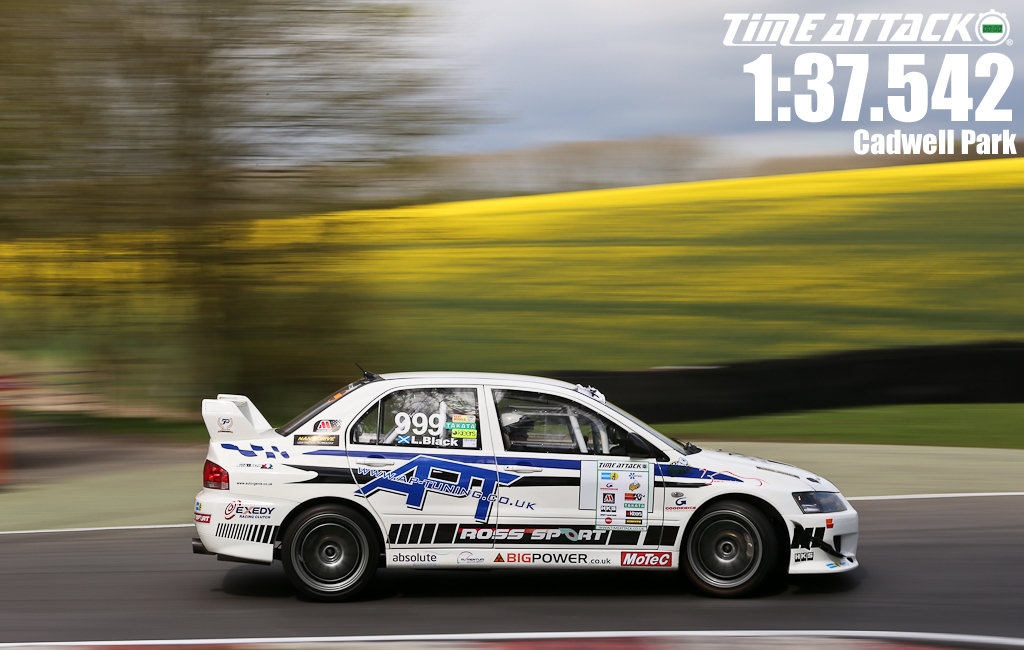 Two times Club FWD champion Marc Donnelly was in good stead with his Ford Escort Mk3, which was now sporting a new T-Wing that Marc spotted for sale on eBay. With a 1:45.850 in the Warm Up and then a 1:44.817 in the Practice, Marc pushed on hard to break the 1:40 barrier in the Qualifying session with a fastest time 1:39.944. 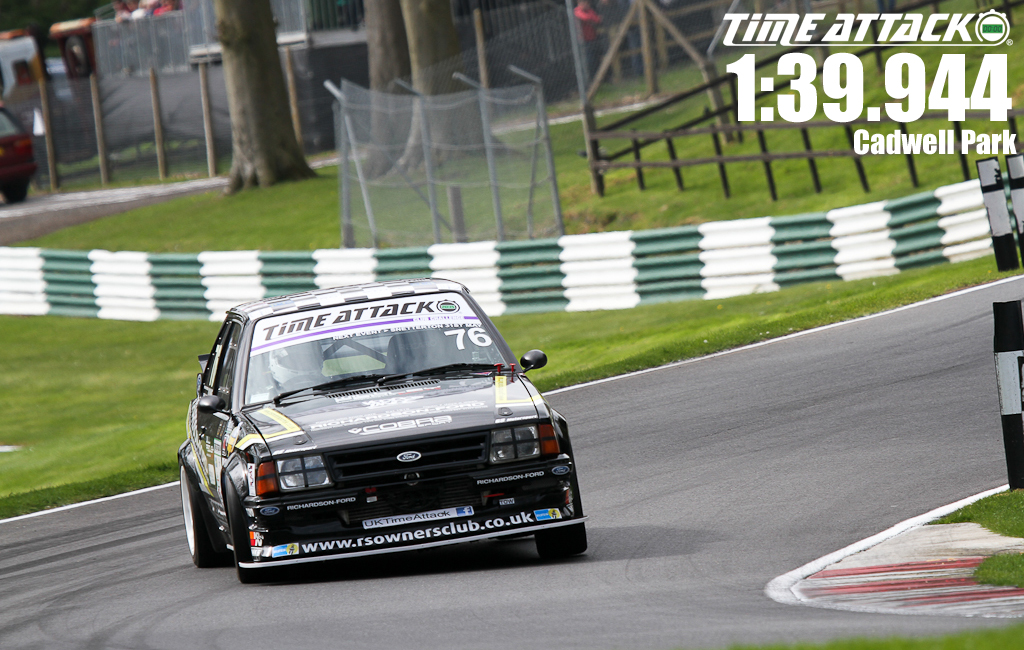 Returning for another year to Time Attack was Damien Bradley in his Subaru Legacy GL in the Club 4wd class. Damien made quite an impact in his debut season last year and was keen keep that momentum going into the 2015 season.

Damien kept his cool for the Warm Up and Practice sessions, pulling a fastest time of 1:45.613 and 1:42.514 respectively but really put the pressure on fellow class competitor Simon Griffiths (EVO III) in the Qualifying round and eventually pipped Simon on the last lap to take the Club session leader board with a time of 1:34.801. 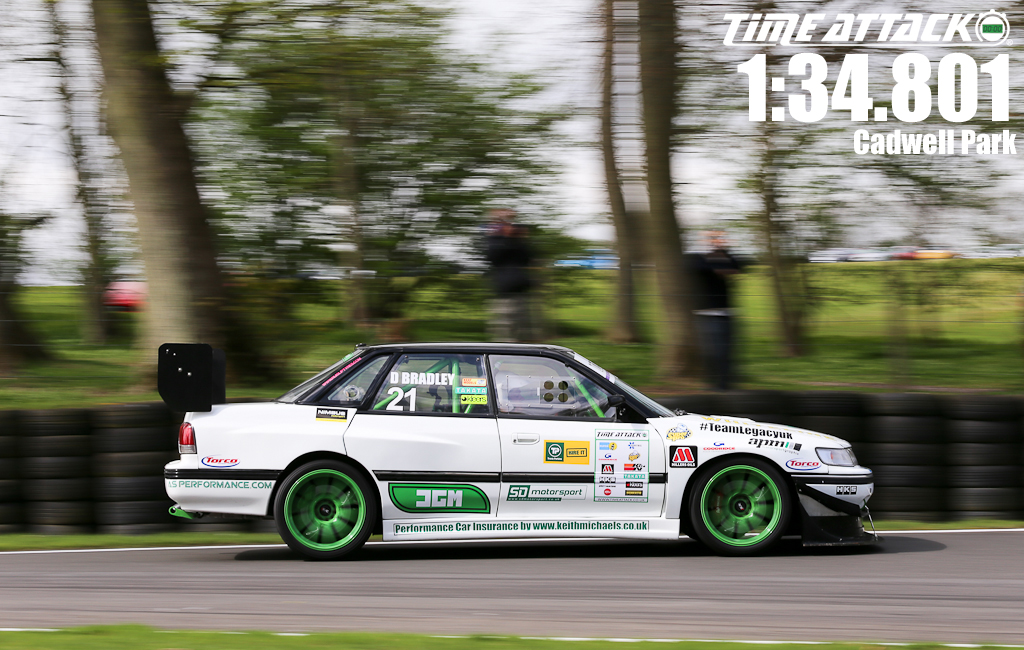 Another regular feature in the Time Attack line-up is the flame-throwing RX-7 driven by Umar Masood. Despite pulling a good 1:43.076 in the Practice session a few technical issues during the session forced a early withdrawal from the rest of the day. 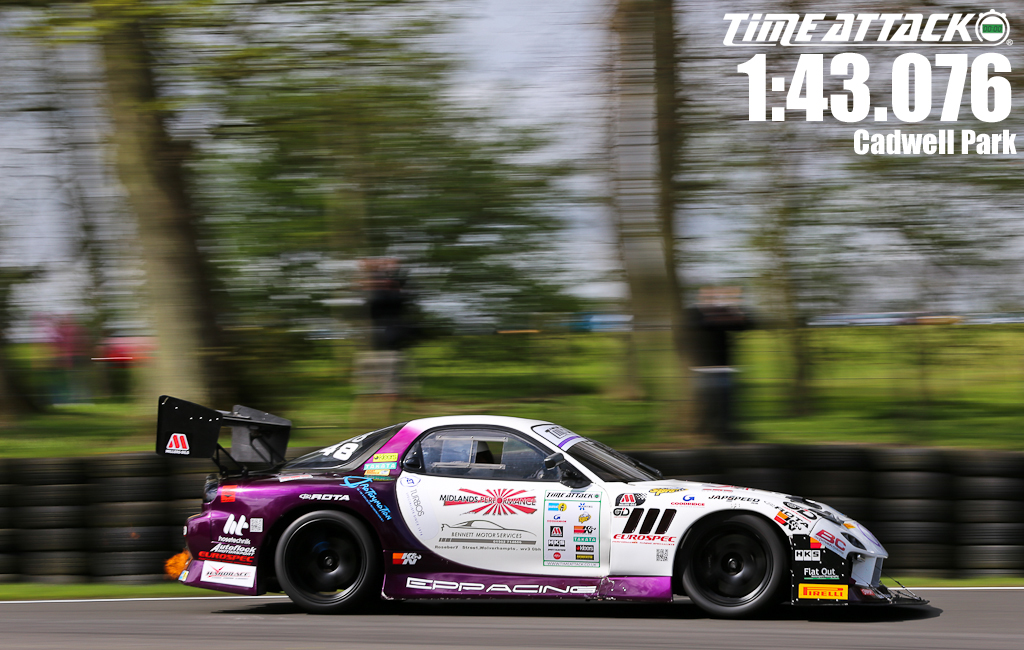 As always, there was a real buzz about the air for the PRO session’s and today’s effort did not disappoint. The return of Andy Papageorgiou’s ‘Black Mamba’ was the hot topic of the day and they were dressed to impress by delivering some close to record breaking times. Andy and his boys came within two-tenths of beating the course record with a fastest lap time of 1:26.789 in the PRO practice session. 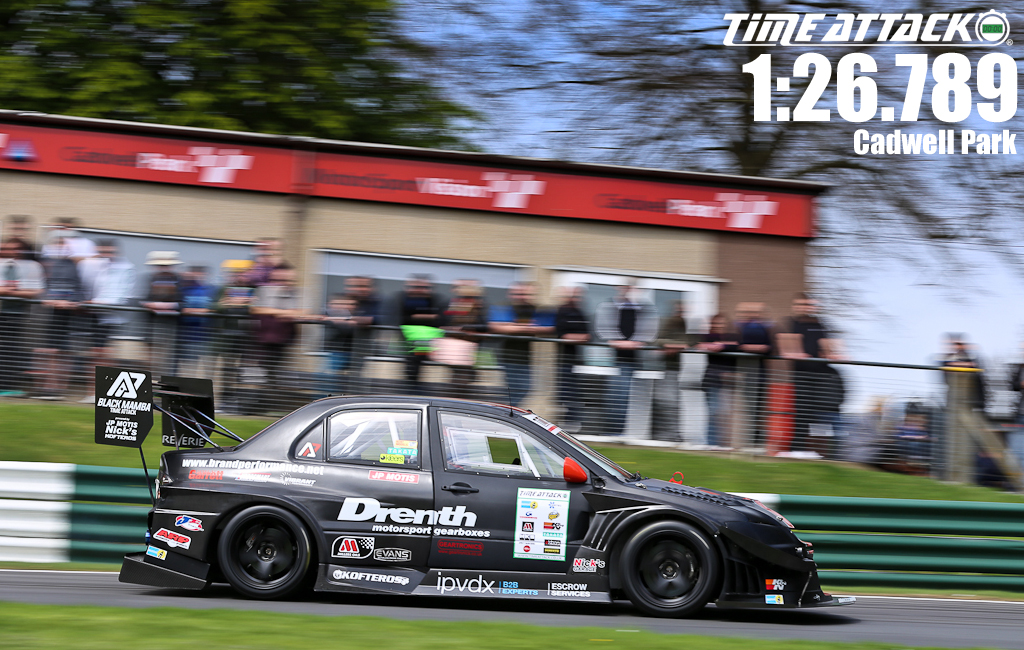 There was a lot of anticipation around the infamous Lateral Performance / SD Motorsport Impreza which would have seen triple Pro championship winner Gavin Renshaw behind the wheel but sadly the Banana wasn’t going to be a moving feature in today’s line-up due to technical issues.

A heavy out-burst of rain moments before the start of the opening Finals session nearly put an end to the day’s activities with the opening two laps of the race having to be lead by the safety car but with just under nine minutes remaining on the clock the safety car pulled into the pits and it was full speed ahead for the drivers. 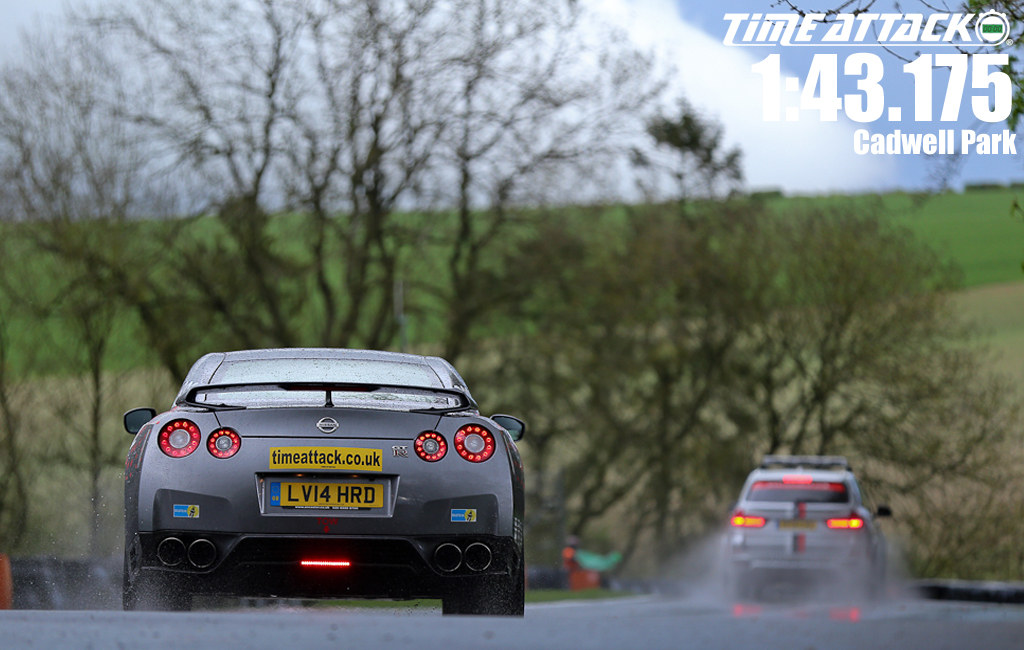 Alan Sheppard in the celebrity AirTec Fiesta put in a good time to finish third on final lap time leader board but he couldn’t take the limelight from birthday boy Adam Barnett and his Mazda MX5 who pinched third place on the podium in the Pocket Rocket class. With Stewart Summers sealing the 1st spot it was down to Robert Oldman in his Fiesta ST to fill the second place position for the day. 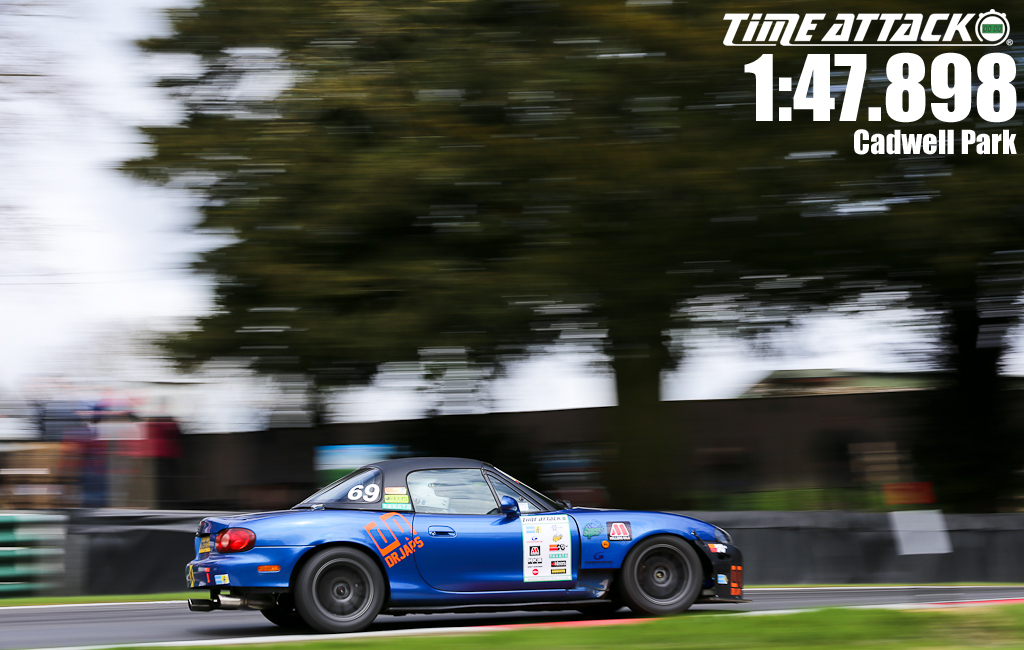 It was Lukas Morley in the Evo VI who took the final lap time leader board earning himself a trophy for single round entry in the Clubman Fl class pulling a fastest lap time of 1:42.726 in the qualifying round. 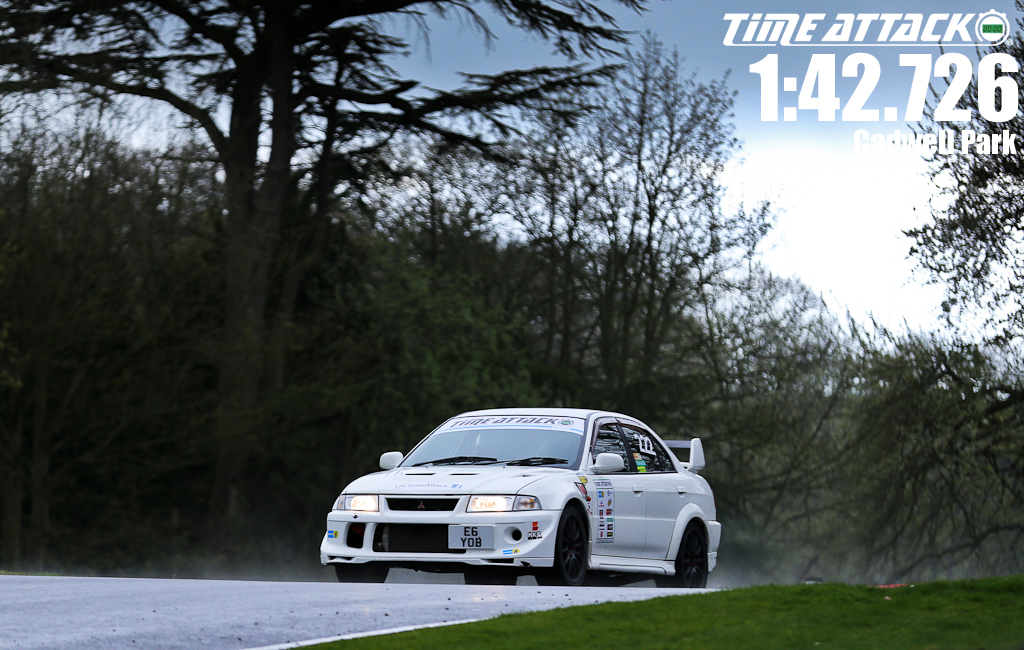 Not long after the final car had crossed the line however another bout of rain set in and unfortunately this time it was here to stay. The inspection car attempted to take to the track to investigate but there were reports of up to six crucial turning points submerged in large puddles which set the fate for the remainder of the day.

So for the Club and Pro final sessions, today was not meant to be.  We caught up with Black Mamba driver Andy Papageorgiou during the rain outburst and he told us the story of how “Cadwell should have been his bogie” today. He was looking forward to putting the completely re-built Evo through it’s paces on the season opener, and for Andy to be back on the track at Cadwell after a ten year absence from the course was a good feeling.

It wasn’t a completely untold story for the Black Mamba team though as Andy and his boys still managed to take full qualifying points in the Pro Extreme class as well as coming close to beating that all time track record. I believe for Andy and the Black Mamba the best is yet to come from them this season.

So that’s it for Round 1 but we hope to see you all out in force at Snetterton for Round 2 of Time Attack 2015 on Sunday 31st May.