Organisers of the Time Attack Championship are pleased to announce the addition of an innovative entry-level category: Run What You Brung Time Attack.

As its name suggests, this new category is designed to further increase the appeal and accessibility of Time Attack, with this innovative addition open on a non-championship basis to all types of car: from standard road-going examples, right up to highly tuned competition machines. It’s also designed to appeal to trackday drivers who are looking for something more than just circulating on an informal, un-timed basis.

The most significant aspect of RWYB TA will be its no-nonsense approach to entry, with only a minimal amount of equipment required. For the car, it’s a four-point harness and a hand-held fire extinguisher, whilst for the driver it’s an approved helmet, race suit, boots and gloves. And that’s it!

Further easing the route to entry will be the opportunity to hire these items on a round-by round basis and thereby avoid the need for significant investment in order to get onto the track. Consequently, costs can be kept to an absolute minimum.

Entry for the RWYB category starts from just £200 per round (including VAT) and includes the cost of joining Club Time Attack, the provision of an competition licence and the hire of a transponder , if drivers do not already hold these items.

The RWYB Time Attack sessions will be integrated into the programme for each of next year’s seven Time Attack Championship events. They will feature four timed 15-minute sessions during the course of the day that will provide drivers with an hour of competitive track time run under UK Motorsport/Time Attack competition permits.

Unlike drivers taking part in the main Time Attack Championship, RWYB drivers will not need to purchase or fit the controlled Pirelli tyres and, whilst having their own specific set of time sheets from each session, will not be eligible for any awards or apply notable comparisons to Championship contenders, given that the rules are different. There will also be no demarcation between the type and specification of the cars and therefore, all RWYB drivers will run together in the same sessions.

Championship owner Andy Barnes is passionate about providing drivers an opportunity to get on track as easily as possible: “We have introduced RWYB Time Attack as our new entry level to remove the majority of cost required to run in the actual Championship. This allows those who want to get on our ladder and aim towards the prestige of the full Time Attack Championship to do so with absolute ease. It’s a very simple strategy.

“In October 2018 at Rockingham we ran a test that ran under our ‘invitation class’ guise. It was a huge success and led to the formal roll out of RWYB for 2019. Consequently, RYWB will be exactly that: you enter, arrive, drive, get timed and go home. I would liken it to a trackday with timing in terms of format, unlike the actual Championship which is more complex, challenging and prestigious. RWYB is designed to welcome new drivers and allow them to experience the thrill of driving under Time Attack conditions and then progress into the Championship at a later date.”

With track limits allowing no more than 35 cars at each event, early booking is recommended, as Andy explains:

“Time Attack has never been this accessible. We only have space for a limited number of drivers at each event and would encourage those interested to move quickly and buy up the spots before they sell out.  Furthermore, this format has already been announced to our existing teams who have welcomed the initiative to encourage even more competition in the paddock. They are all onboard to make RWYB TA a success and I thank everyone involved for supporting this landmark addition to our Championship.”

To buy your RWYB entry on a per round basis, the shop is live and ready now, click here

Once you have purchased your entry, further information and an official entry form will be emailed to you.

Alternatively, you can download an official entry form HERE

You can find a list of the minimum requirements HERE

*Payment for entry includes these items for new competitors. Any competitor that already holds TA membership, a competition licence or has a transponder, will not receive a discount for entry. The full price remains payable. 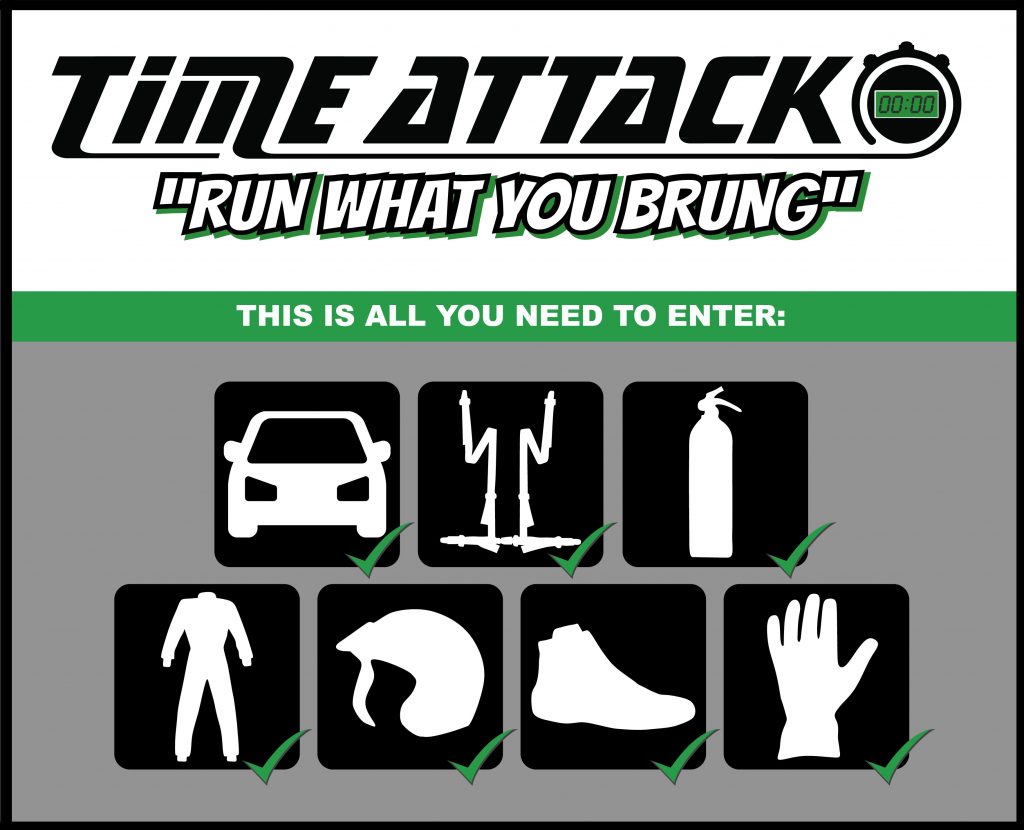 About the MSA Time Attack Championship

Time Attack defines the art of registering the quickest lap-time.  Originating in Japan and introduced to Britain in 2006, the UK Championship has become the largest and most professional series of its kind in the world.

It attracts drivers and teams from all corners of the British Isles, as well as many from overseas, assembling an eclectic mix of cars that readily relate to those owned by many of the 1,000s of spectators and on-line supporters who follow the action.

Organisers work hard to ensure that every Time Attack round is a weekend to remember, with many of the rounds supported by spectacular and well-attended car shows, which means there are plenty of spectators watching the action.

Time Attack is held at the UK’s leading tracks and is organised to the same level (or beyond) of organisation as top-level circuit race championships.  Over an hour of track time per round is on offer, with four sessions during the day comprising Warm up, Practice, Qualifying and the Final. Results are calculated from the lap times set in the Final session.

Competitors who register for the full season will score championship points. Single round Championship entries are also accepted.