What better way to end the 2015 UK Time Attack Championship, than to return to where it all started ten years ago? A lot has changed in the world of Time Attack in that time. Many names have come and gone. Many lap records have been set, some of which have lasted longer than others. We had a sunny, dry day and the entire Rockingham International Super Sportscar Long circuit to do battle on.

In the Pro classes, Russ Paton (Club Pro) and Lloyd Wright (Classic & Retro Pro) had already scored enough points to become 2015 champions. However, the Pro and Pro Extreme titles were still up grabs. Who would come out on top? Who would take home the debut Time Attack lap records on this longer course? Read on to find out.. 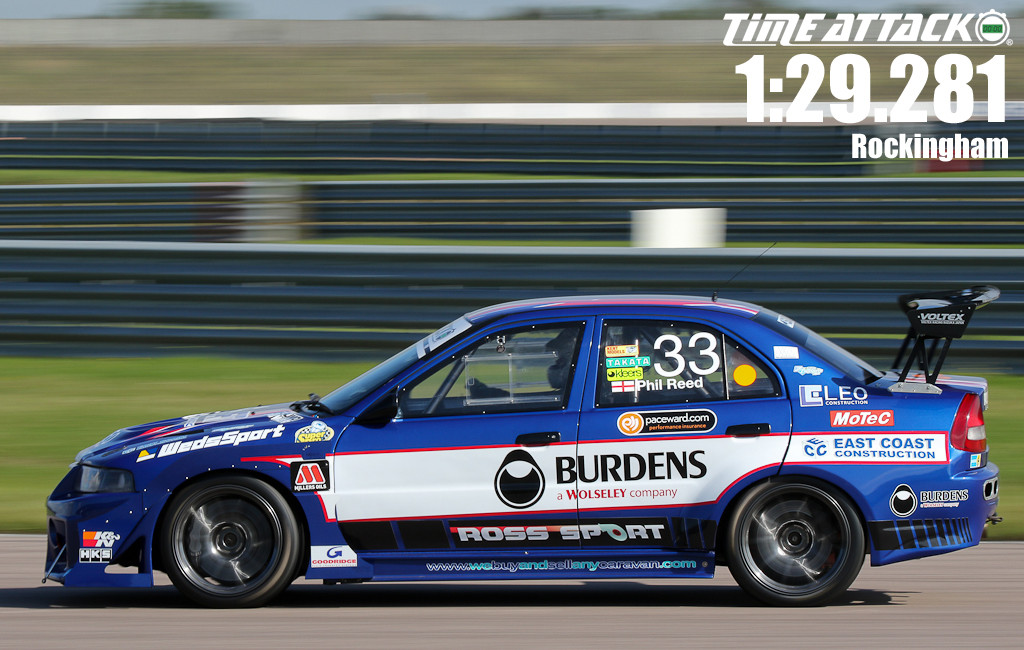 Phil Reed grabbed the 2015 UK Time Attack Pro Extreme Championship title at Rockingham, despite hitting the concrete wall at well over 100mph! In the championship standings, it was a straight shoot-out between Phil and fellow Lancer Evo driver Andrew Barbour, and Phil brought some extra firepower with him to Rockingham. Having already set some of the fastest speed trap figures throughout the year with just 800bhp or so, the AP Tuning guys gave Phil extra boost and nitrous oxide injection to play with for the final round! Phil qualified in second place (1:31.589), before unleashing everything he had in the final – where he set an incredible Pro Extreme lap record of 1:29.281 to win in style. After setting his winning lap, Phil pushed on for a quicker lap. He entered the banked Turn 1 a bit too hot, understeered out onto the marbles and hit the unforgiving concrete wall side-on. Luckily the damage was minimal and he managed to drive slowly back around to the pits, where his team and spectators alike congratulated him on a well-earned victory. 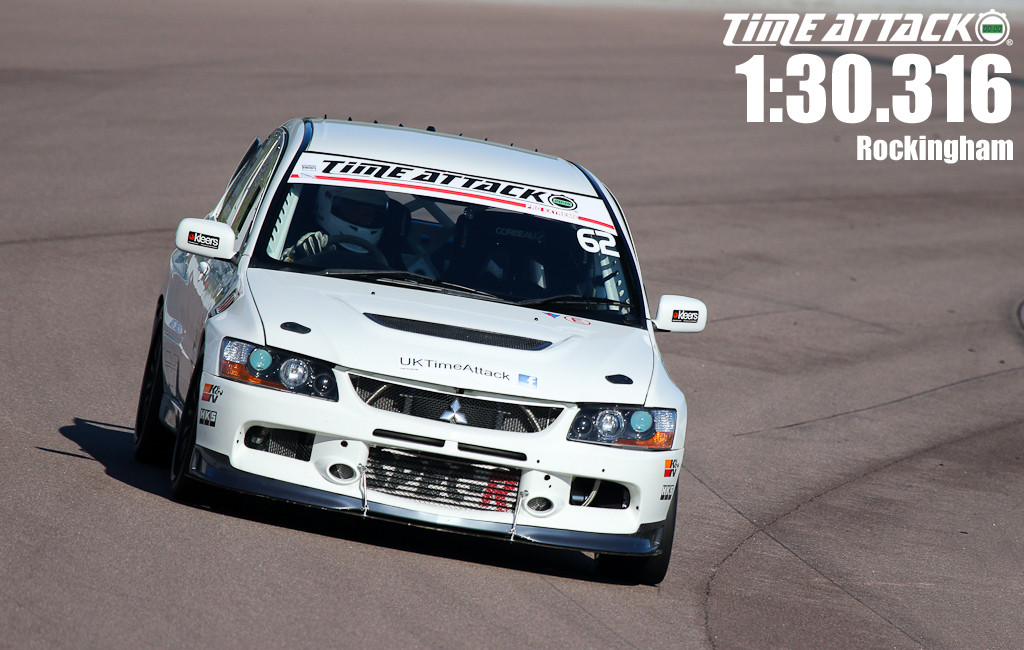 Where did Brad Sheehan come from!? We always knew Brad was capable of performing right at the front of the Time Attack field, but he will be the first to admit he’s had reliability issues with his Mitsubishi Lancer Evo IX throughout the years – hence he was in his E46 BMW M3 at Croft, in the last round. This year he switched teams to NR Autosport, and Nick and the guys have been working through the issues to make the car both reliable and fast. One of the key areas NR and Brad have worked on is the suspension. Nick has been focusing on the setup of the Reiger Racing dampers and we saw the results at Rockingham. Brad controlled his usual steer-from-the-rear driving style to produce a neat and tidy lap that earned him the runner-up spot in the final. Amazingly, he reckons there was still a bit of time left on the track, but he was stopped from trying again by a red flag. Even so, this was his best performance of the year by a mile. 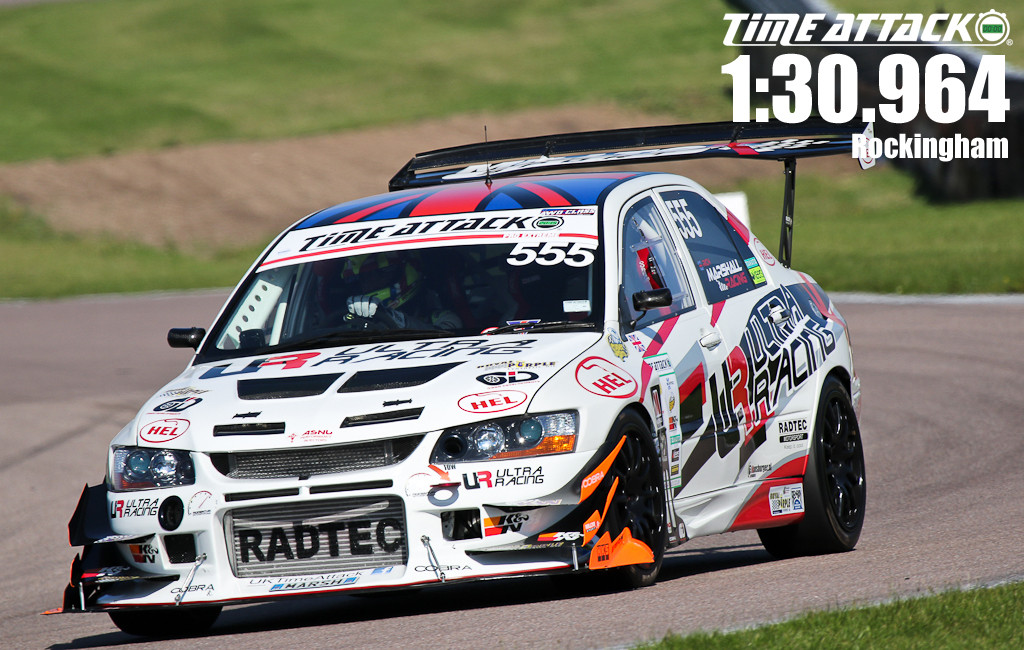 Richard Marshall has been competing across Europe all year, and it’s safe to say he’s won pretty much wherever he’s gone. He claims this is his last appearance in UK Time Attack, certainly in this car, but we’re not sure if we believe him. He’s been around for years now and at Rockingham he was still the reigning Pro class Champion, looking to end 2015 with a bang. It’s fair to say he performed extremely well, right on the pace and grabbing third spot on the podium with his fastest time of the day right at the start of the final. We’ll have to see what the future holds for Richard but no-one can deny that he’s been extremely quick this year. 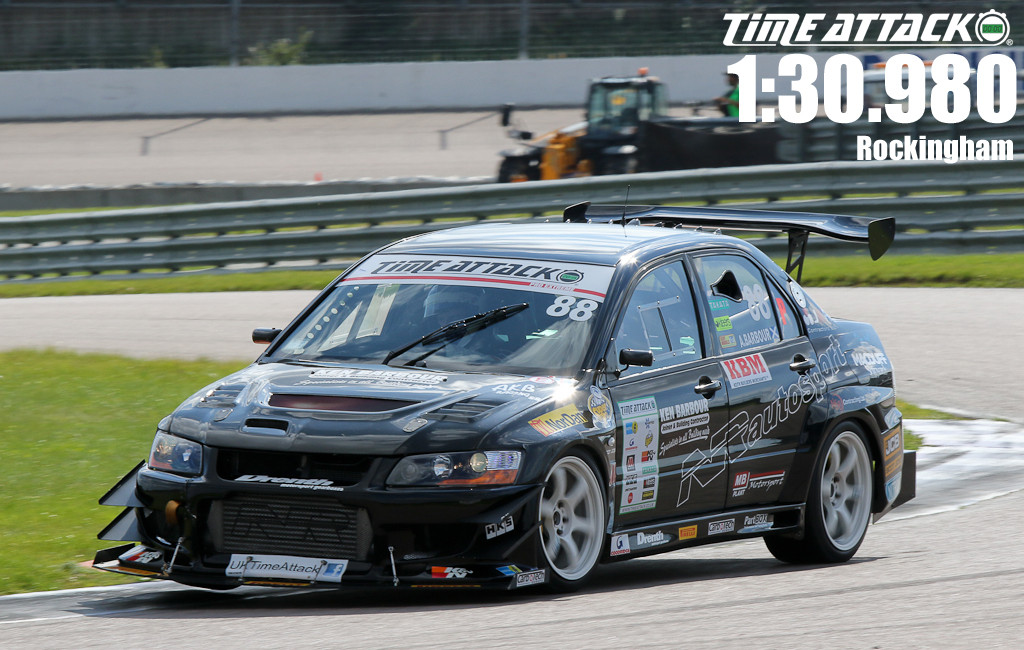 Sadly for Andrew, things didn’t go his way at Rockingham. Heading into the event, he was locked in a fight for the Pro Extreme title with Phil Reed, in his debut year with his new car in Pro Extreme. In fact, all of our Pro Extreme drivers at Rockingham were new to the class this year. The difference is that only Andrew had a completely new car to learn too, and he admits that if had been offered second place in the Pro Extreme Championship at the start of the year, he would have grabbed it. Andrew started well, qualifying in first place with a 1:31.195 that was 0.394s faster than his Championship rival. However, when the final came everyone went faster and Andrew found himself at the rear of a very fast quartet, just 0.016s behind third-place Richard Marshall. That’s how close the pack were in the final. So it was a slightly disappointing day, but a very successful year for the Flyin’ Scotsman. 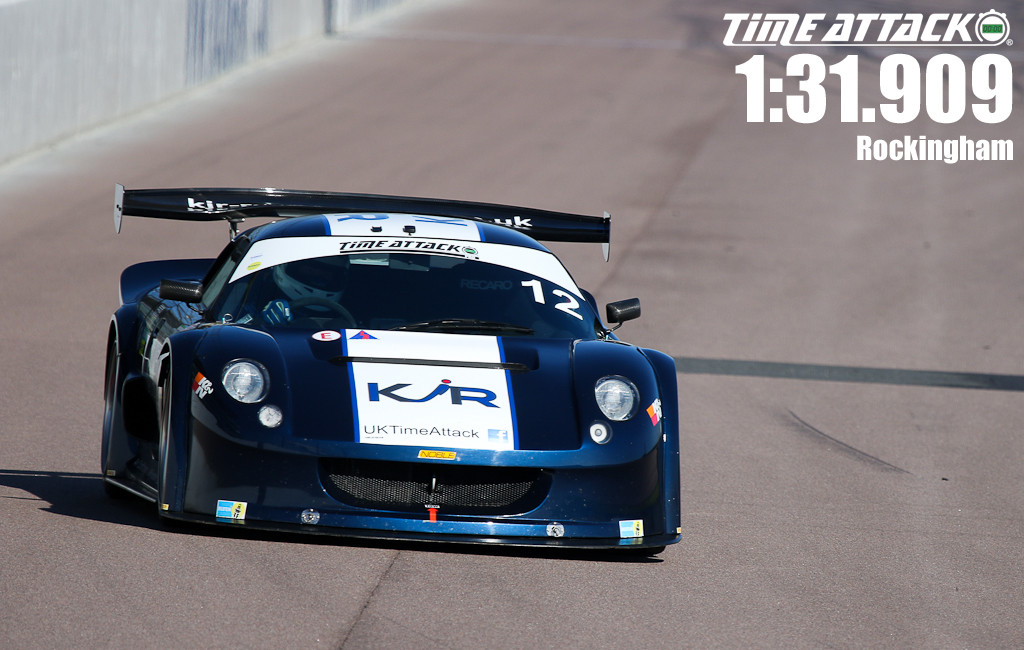 Is there any stopping Kevin Jones and his Jetstream Motorsport Noble M12 RSR? Last year he won the Club RWD Championship, this year he steps up to Pro, swaps to slick tyres and win his second successive title! The Martin Cheetham engine in the back of Kevin’s car has now completed two full seasons without any issues. It’s also providing plenty of power, as Kevin’s lap times prove. Kevin won a tight qualifying battle, setting the fourth fastest time of the entire session and quickest in Pro (1:33.762). The Noble driver then found a whole heap of time in the final, taking maximum points with a 1:31.909, the fastest time by any rear-wheel drive car at Rockingham. If Kevin chooses to go for a hat-trick of Championship titles next year, it’s going to take a very special car and driver combo to beat him. 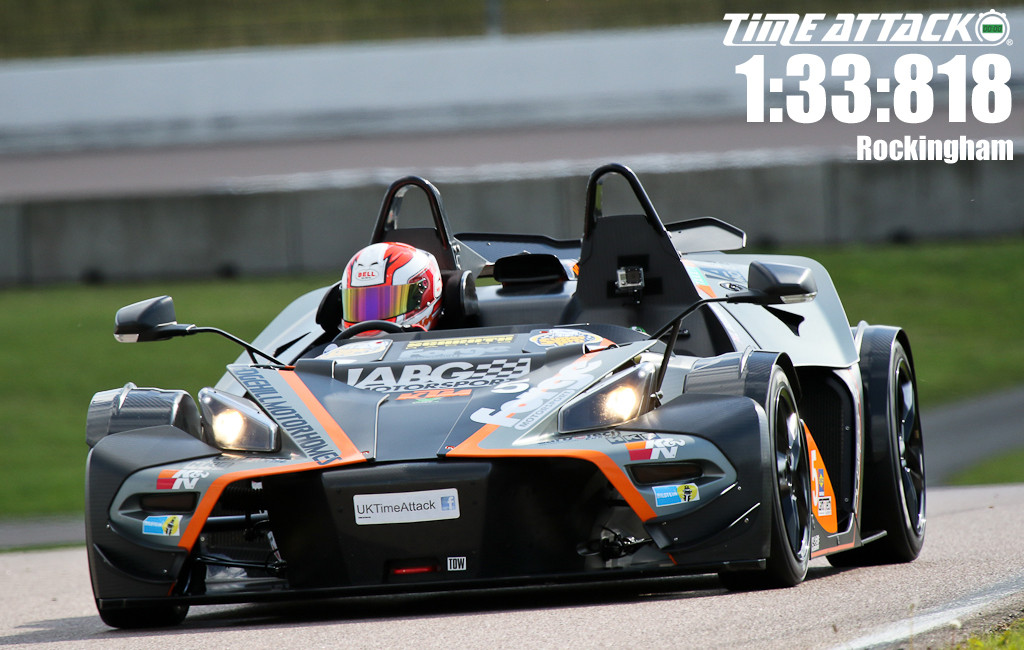 In a class that includes a 3.0-litre twin-turbo V6 Noble and a triple-rotor turbo Mazda RX-7, Lee Broadhurst has been effectively out-gunned in Time Attack this year. However that’s only half the story, and Lee’s KTM X-Bow with 2.0-litre turbo Audi TFSI power in the back, is only half the weight of his competitors. Making up the time in the bends has been Lee’s priority all year, and that’s been clear by his spins towards the end of the year. Spectacular to watch, Lee has been great entertainment this year and has proved he’s no slouch, even in the face of stiff competition – taking the outright win at Snetterton for example, in Round 2. At Rockingham, Lee was on the pace in qualifying (1:33.818), finishing in the runner-up spot just 0.056s behind Kevin in the Noble. When the final came however, Lee couldn’t match Kevin’s extra pace but still recorded a credible 1:34.481, and the runner-up spot in the Pro Championship. Lee and his ABG Motorsport-supported X-Bow have done themselves proud this year, and we’re already hearing whispers of plans to come back stronger next year with new goodies. Watch out Kevin.. 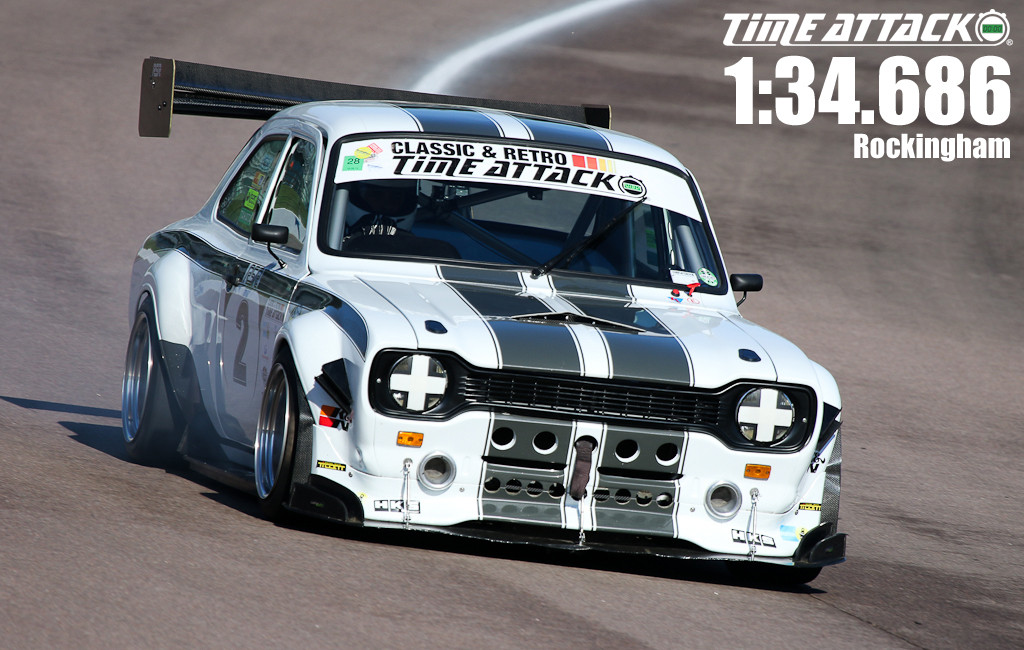 A crowd favourite all year, Lloyd Wright’s Escort RSR8 is a work of art. Not only is the twin-Hayabusa V8 engined Escort an incredible machine, Lloyd’s attitude has been spot on. When several Classic & Retro Pro competitors pulled out at the last minute before Round 1, Lloyd pulled his socks up and focused his attention on the Pro and Pro Extreme drivers instead. He’s been pleased with some results, less so with others, but his pace has generally been around the Pro guys, sometimes pushing the Pro Extreme chaps too. So he was slightly disappointed with his lap times at Rockingham, which were marginally slower than the Pro drivers, but he’d already become the driver of a cult car for many Time Attack fans. Lloyd qualified in 1:35.467, before setting a best of 1:35.538 in the final, and of course took home the inaugural Classic & Retro Pro Championship title. Hopefully he’ll have some new friends to play with next year, but now that Lloyd has a year of experience under his belt, they had better come prepared! 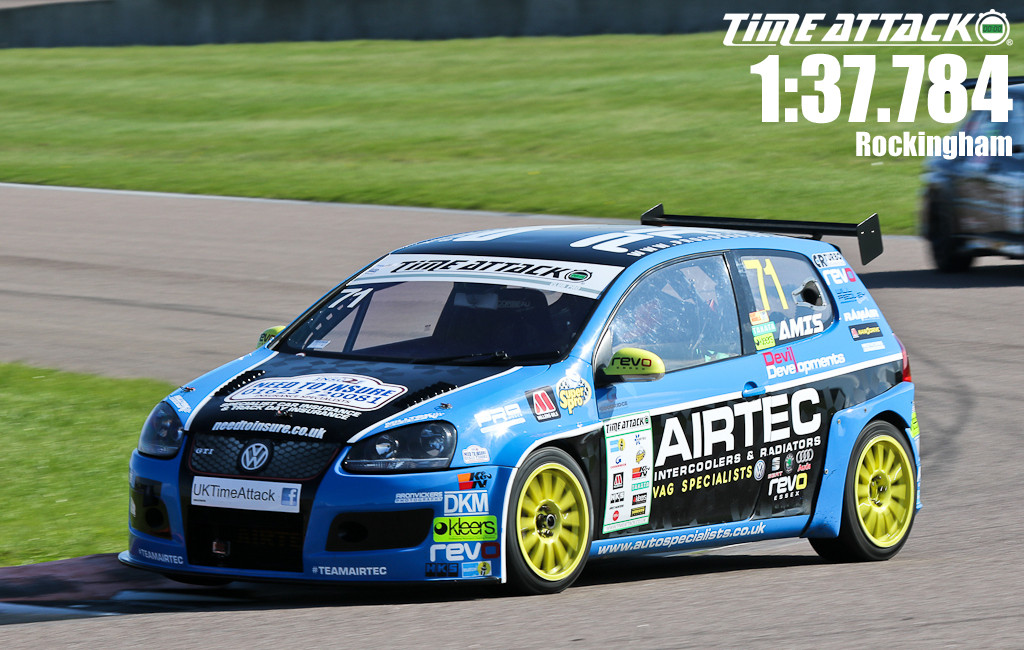 It was a mixed day for Ronnie Amis at Rockingham. In many ways, it’s been a difficult end to the season for the Airtec VW Golf driver, with mechanical niggles in the later rounds ruining his Club Pro title challenge. Ronnie topped the Club Pro times in Warm-Up (1:39.374), Practice (1:38.881) and Qualifying (1:1:37.784). He earned 5 points for qualifying in first place and looked set for a strong finish to the season. However, when the final session began the alternator in Ronnie’s Golf died. He didn’t set a time, which was particularly annoying as Ronnie was sure he could go faster. As Ronnie described it himself, this summed up his year perfectly. Despite this disappointment, Ronnie still took home a trophy for third place in the Club Pro Championship, and of course has a new Club Pro Lap Record to help soften the blow. 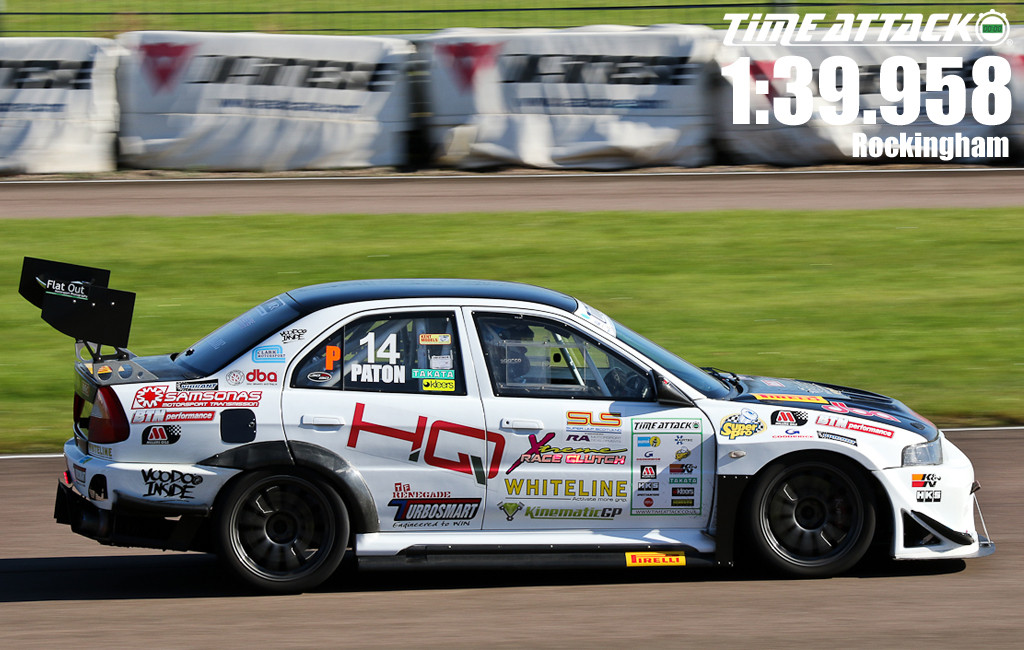 HQ Garage Evo driver Russ Paton had made the trip down from Scotland knowing he was already 2015 Club Pro Champion. That didn’t stop him from trying to finish the year in style, but he was surprisingly down the order slightly in qualifying, finishing third with a best of 1:41.087.  When the final came around, he either wound up the boost, took a brave pill or both, because he went much faster. Russ finished the year with a win in the final session, setting a best time of 1:39.958. We know Russ supports other drivers in other series too, and he was up at another track in Scotland the day after Rockingham, which shows his dedication to Motorsport and his HQ Garage customers. A popular win for a driver who has helped out behind the scenes at Time Attack, when this very car was still being rebuilt from the wreckage he created at Brands Hatch a couple of years ago. 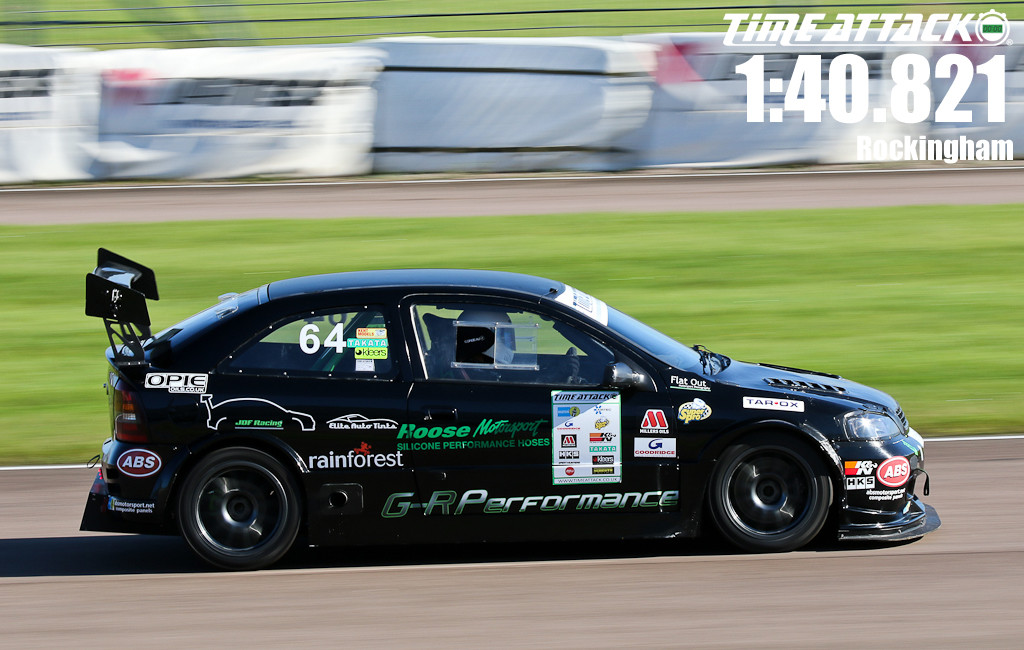 Jonny Fletcher could be in Club FWD this year but decided to push himself into Club Pro for a bigger challenge. He rewarded his own ambition at Rockingham. When Ronnie Amis’ mechanical issues opened the door, Jonny stepped up and delivered the lap time to score the points that ultimately saw him snatch the runner-up spot in the Championship. Jonny qualified in second place with a 1:41.070, a miniscule 0.017s ahead of Russ Paton in third place! In the final, Jonny once again finished in the runner-up spot, this time 0.863s behind Russ, with a best of 1:40.821. It was a strong finish to the year for Jonny. Ronnie may have opened the door, but Jonny still needed to deliver that lap-time, and that’s exactly what the Vauxhall Astra driver did. 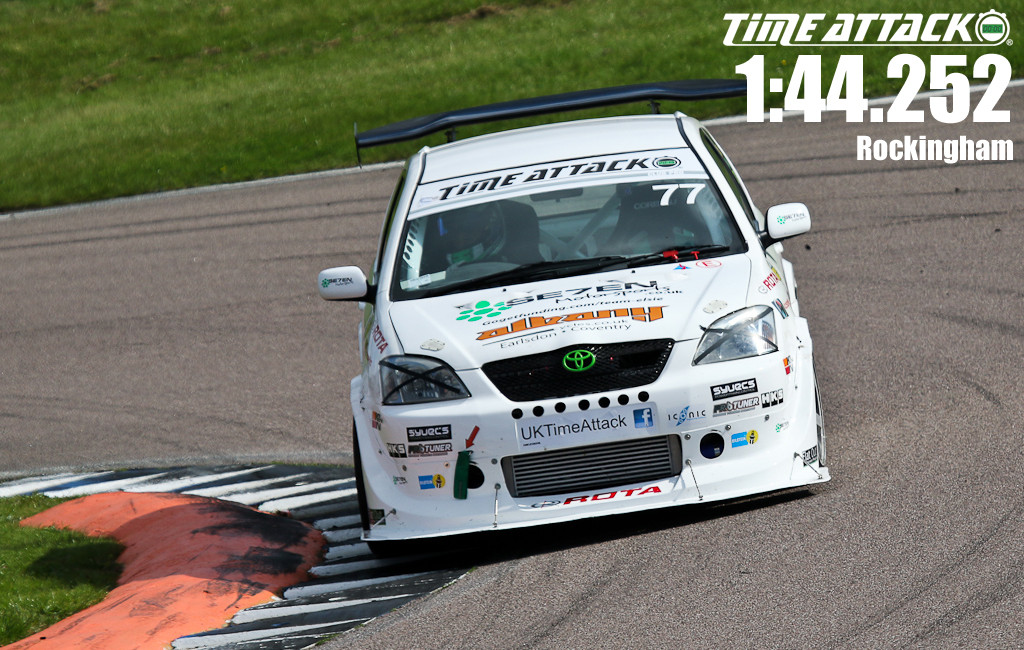 Lee Mabbett didn’t have the debut year he was expecting, in his supercharged Toyota Corolla T-Sport. Issues with his competition engine early in the season forced him to reset his expectations, and he’s moved forward admirably. Once again Greg at ProTuner tweaked the ECU map, got the Race Tech dash working correctly and Lee sorted the issue he’s been having with the supercharger belt slipping. Lee qualified with a 1:44.252, despite stripping third gear during the session. Without a gear that he admits he was using for around 70% of the lap, plus a slipping clutch, Lee’s final lap time of 1:48.021 isn’t representative of what he could have achieved. Still, it scored him the points to grab the third step of the podium at the final event of the year. Since Rockingham, we’ve heard rumours that Lee is building a new car for next year. So if you like the look of Lee’s car with it’s custom aero package, get yourself to the Se7en Motorsport facebook page for more info. We can’t wait to see what he comes up with for next year.